Indiana Jones and the Message on the Bottle 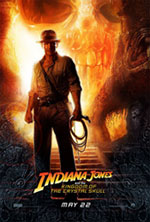 I will readily admit that I am a total nerd. I was totally psyched about the new Indiana Jones movie that came out a few weeks ago. I went out and bought the first three and watched them in like two days. Watched all the extra stuff on the DVD’s. I can’t even tell you how many childhood memories those movies brought back. It was great!

But when I finally went to see the new one, I found myself a bit disappointed. Some of the scenes were so ridiculous that I just couldn’t get past the impossibility of them. The atomic refrigerator? The monkey vine-swinging thing? Three ginormous waterfalls? I mean, seriously! Yeah I knew the first three had implausible moments, too but not like this! Or were they?

Had Indiana Jones changed or had I just grown up and become too cynical? The more I thought about it, I realized it was the latter. And so as I went to see it a second time and knew all the crazy things there were going to occur, something magical happened for me….it became an awesomely fun Indianan Jones movie! Yeah, I’ve read a bunch of reviews harping on the unbelievability of some scenes, but somehow after seeing them the second time they changed from being ridiculous to feeling more like the classic mine cart ride in Temple of Doom or the Airplane Fight scene in Raiders.

Which brings me to how hard it is sometimes to look at something objectively when you are close to it. The first three Indiana Jones movies are deeply ingrained in many of our lives personally; they take us back to when we were young and thought we could be Indy, too. Having a new chapter come along when your almost 20 years older is just hard to deal with on a lot of levels.

It’s hard to read the label when you’re inside the bottle.”

Same goes for your business. When a designer comes to you with a new design for your logo or website or brochure, they are bringing an entirely new perspective to something that you have lived with, worked with and sweated over for probably years of your life. And your first reaction will probably be, “That is not us! You’ve missed it totally! You don’t understand us!” But here’s the thing: a good designer will bring an objective, unbiased viewpoint to the project. They will help you present your company to a larger audience.

It’s hard to read the label when you’re inside the bottle. You get so wrapped up in the day to day details that it’s easy to forget what your potential clients need to see. Case in point: We have a client who has been promising to get us content for his website for almost two years now. He is the president of the company and refuses to let anyone else write it; not even a professional copywriter. His reason? He thinks that he is the only one who knows enough about his product to get the technical details taken care of. Now, if he’s going to give me content that is so technical that only he understands it, does that seem like a good thing? To him it makes sense because he’s inside the bottle, hammering out the details; but outside it seems ridiculous and mind numbing.

I’m not saying that we or other designers are always going to nail our designs the first time, but it is important to remember the value of an objective opinion when it comes to presenting your business to the world.

So give Indiana Jones and the Kingdom of the Crystal Skull another chance if you didn’t like it! And give that logo or website design another chance too. You never know, you might grow to love it.