I’ve tried a couple of times to start this post because it is quite difficult to describe our friend Troy, much less his music. Up until the last two years, he was that guy that you knew who popped into town, you hung out and he told you about his unbelievable adventures and hijinks, and then disappeared for another 8 months. Now, he’s still that same guy, but he just stays in town.

During all that time while he was in and out of town, Troy happened to be writing songs. Really good songs. They were raw, funny, and you just couldn’t get them out of your head. I mean after you listen to “Rosedale” and you realize that he really did just sing: “I said she was fat, she said you know what? You’re not very smooth” you’ll laugh just as hysterically as we did when we were recording this album. In fact, one take of “Second Time Around’ was so hilariously “ruined” by our fits of laughter that we kept it for posterity and now I can’t listen to the real song and not chuckle to myself when the last chorus comes around. Actually, I have to share that with you. I would be remiss to deprive of you such a pleasure. Go ahead and click play and keep reading. Trust me, you’ll know when it gets to the good part (it happens at the end of the song if you are not so patient

Nothing was off limits. We sang and played and we captured that good, raw thing that I hoped we would. 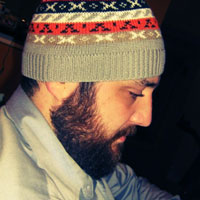 Anyhow, in early 2004, I heard that Troy was playing a show. Jon was playing guitar for him that particular night, and he mentioned something about coming out to record the show. So I did. That night I captured one of the most entertaining performances I’d ever been to. Was it musically perfect? Not at all. Was loads of fun? You better believe it.

And that my friends, began one of the best recording sessions I’ve ever been involved with. Nothing was off limits. We sang and played and we captured that good, raw thing that I hoped we would.

The songs on “Things I Said” are a wonderful mix of comedy, heartfelt girlfriend wooing, and piratey math-inspired rock and roll. And yes, you read that correctly. Troy is unafraid to try anything musically. That’s what makes it enjoyable. There are moments in the record that are equal parts Jeff Buckley and Jack Black. Personally, I wouldn’t have it any other way.

Do yourself and your music collection a favor and pick up Troy McNeil’s “Things I Said.” Go get it right now before you forget or start watching something on YouTube. It’s available at iTunes and Amazon.

Annoying: People That Don’t Get Back to Us