I was forced into my phone simplification because I ran out of memory. You see, the kids and I like to make little mini-movies. Our most recent one involved all their Teenage Mutant Ninja Turtles toys and - well let's just say it's going to be epic. Because it took up most of my phone's space.

At least I thought it did. 'Till I loaded up iTunes and saw that my Apps were taking up more space than my HD video. Bleh. So since I was over capacity it was time to free up some space.

I've had an iPhone since the first version way back in 2007 so there was definitely some cruft laying around.

The first thing I did was take all the games off except one (Badland). I don't really play games that much on my iPhone, but I noticed that if I did play any games it was just the most recent one I downloaded. The others fell by the wayside. The kids probably won't be too happy about this development, but they mostly play on our iPad anyway. This freed up like 5 GB right away which was good.

After that, I went to reorganizing and re-grouping various apps and removing anything that I didn't use on a regular basis. 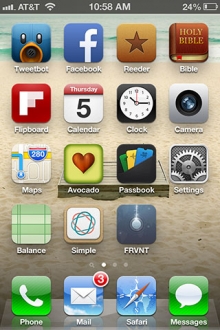 I ended up with a homescreen with apps that I use every day and a second screen with groups of apps that I use less often. My main screen has apps like Tweetbot, Facebook, Reeder (RSS), Bible, Flipboard, Avacado (for sharing to do lists with the wife), Simple (banking), Frvnt (prayer requests) and a check registry app called Balance (I don't think it's available to download anymore). You'll also notice I'm using a bunch of stock apps like Calendar, Clock, Camera, Maps, Passbook, Settings, Mail, Safari, Messages and Phone. This is on purpose - if the built in apps do a good enough job then no need to replace them.

I didn't fill up my main homescreen, either. For whatever reason having at least one open space really keeps me from feeling overwhelmed when I look at the grid of icons. Plus, with iOS7 right around the corner I should be able to hide the Setttings app and ditch my little Flashlight app entirely.

Finally I went through and disabled as many notifications as I possibly could. My phone is much quieter now and works for me rather than stressing me out with lots of beeps, reminders and apps that I don't need. I like it! 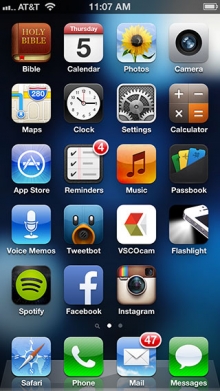 Like Jon, I had a ridiculous amount of apps and things on my phone. After the initial purge of games I no longer played, apps I never used, and that sort of thing, I was left with two screens.

The home screen has things I use all the time, and things I need like voice memos, a flashlight app or apps I want to access quickly, like social media stuff and spotify.

The second screen catches all the occasional use apps. Utilities, entertainment, travel apps live here. And that's it.

The other simplification is an addition. Siri. I don't ask her for the weather, to check sports score or any of that other stuff. I use Siri at what she does best, being a second brain.

My brain likes to think about as few things as possible. I'm a happier and more productive person that way. So when I stick a drink in the freezer, I'm all “In 30 minutes, remind me to get the drink out of the freezer.” Why? Because I'm going to forget these little things anyway, so I might as well forget them with confidence. In a regular day, I get to not think about as many as 5 to 10 things this way. That means I get all that brain power back to think about things that matter.

So far so good. Fewer things on our phones are distracting us, and there's fewer things on the phones to get distracted by. That means we get to use our brain power for more important stuff. Like eating bacon and making Ninja Turtle movies. Sweet!

This is Part 2 of our Simplify Experiment. Check out Part 1 and Part 3 if you enjoyed it!