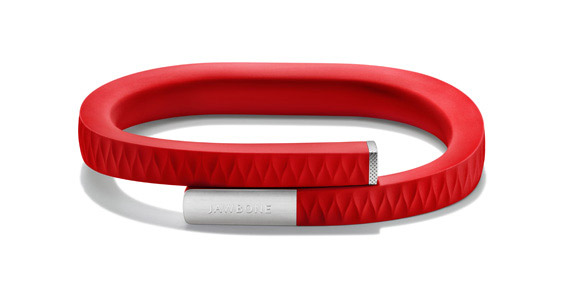 After I got my UP wristband several people asked me to let them know how it was working out. Now that I've had it for a month and a half I think I have a pretty good idea of how well it works. In my last post I said I was only interested in the activity and sleep cycle parts of the band and after using it that's still true. In all honesty, the food tracker isn't very helpful anyway. 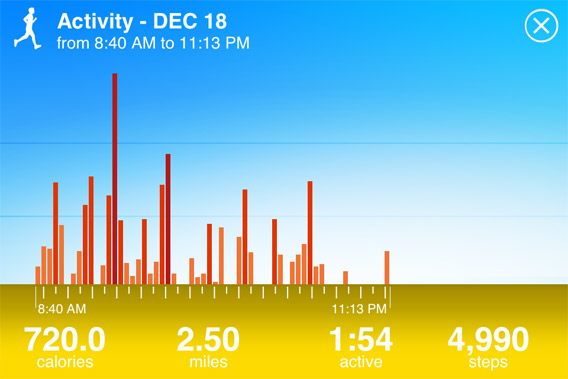 There are actually two types of activity…normal active mode and workout mode. The normal mode worked as advertised…I would get a little buzz every 30 minutes (that's what I set it to) to remind me to get up and move around. It was also pretty effective at giving a me a quick glance at how active I had been throughout the day. Days I worked at the computer my activity was super low with just little bumps when I got up. But weekends where I was busy in the house or playing with the kids was much better. 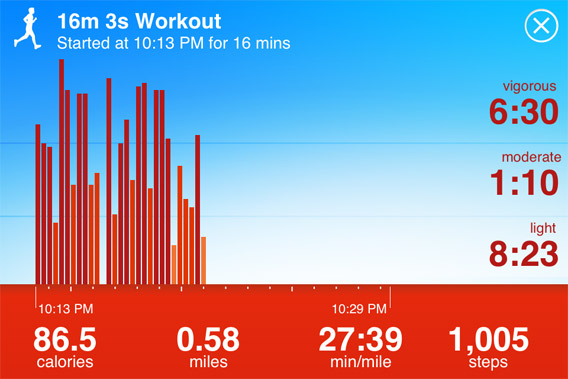 The workout mode seemed way less accurate to me. For instance, I ran a mile on the treadmill last night and it only registered half a mile. Apologies, I misread the treadmill (first time using it). The workout mode is indeed pretty accurate. Also, when you're actually moving you can start up GPS mode in the app on your iPhone and track things better…but that means I have to run with my iPhone and I haven't found a good arm band to hold it yet. I wasn't expecting a startling accuracy, but would have hoped for something a bit closer. Either way, it does help me remember to be a little more active while I work, and that's a good thing. 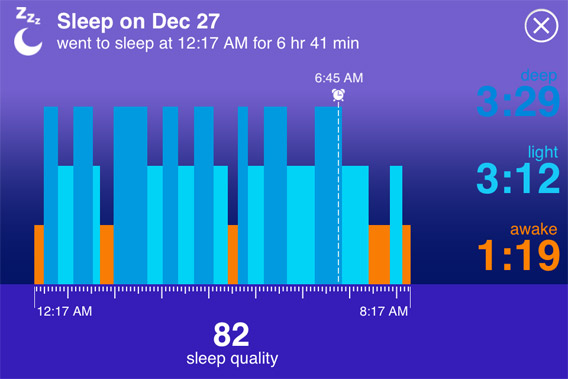 The sleep cycle tracking seems pretty accurate, but the waking me up refreshed thing didn't happen too often (see chart above). Now, to be fair, we have a 4 month old that doesn't sleep through the night and my other 3 kids battled the pukefest that's been going around for about a week so it's very hard for me to get a solid night's sleep. Keeping an eye on this as it might be better in a few months. What was cool was seeing my sleep cycle and an actual number of how many hours I slept. I quickly saw a direct correlation between my mood and that total hours of sleep number, and it's made me more conscious of making sure my body gets the rest it needs.

Here's where we go downhill. Jawbone has had a lot of trouble with the UP devices and are offering full refunds to anyone who bought one, even if they keep it. Why? Major battery issues and button issues have plagued the bands. I'm already on my second one after the button just stopped working and the battery life dropped to 3 days. The second unit is still doing well so far. The hardware several practical issues, too though. It's so bulky that working on a laptop and trying to type is impossible. Also the button's corners are kind of sharp. I was playing basketball with my nephews and gouged my side through my shirt. It was not pleasant.

I still have a lot of problems syncing. It doesn't work about half the time. Unplugging and replugging several times usually gets it to start, but it's a pain. Sometimes whole chunks of the day don't make it, either. Otherwise the software is really really basic but gets the job done. I wish they would make a way to see more than just one day at a time. Like a month overview of my sleep patterns or exercise would be fantastic. Thankfully that's something that can be added to the software and based on a questionnaire I got they're already thinking about it.

So would I recommend it?

Not yet. Clearly they have a few bugs to work out and the software needs to mature. I would hope v.2 has a much smaller form factor, too. But it has made me much more aware of my activity and sleep cycles and I think the few pounds I've lost are a result of seeing the data. It's a really great idea; just needs a bit more work.