We recently had the pleasure of working with CD Baby creator Derek Sivers on a new project called MusicThoughts. It’s a great collection of quotes from musicians on everything from the music industry to life in general. In short, pretty kick-awesome! Go check it out already!

This was a challenging project from start to finish. First of all, we couldn’t modify the HTML at all, only the CSS. And second was the support for multiple languages. 10 to be exact! This had several ramifications: 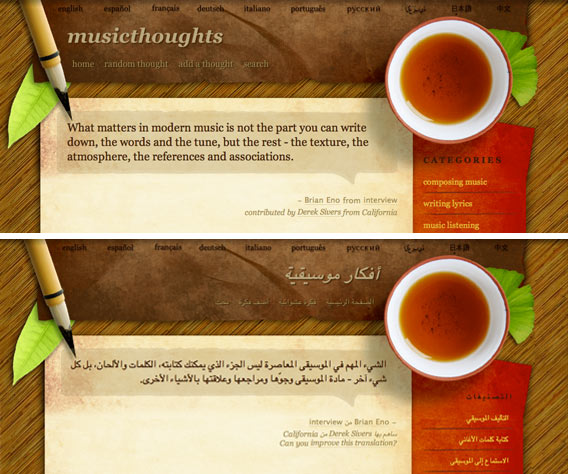 And it’s the last point I wanted to explore a bit more. You see, for languages that read from right to left there’s a dir="rtl" attribute that we can tie into with CSS so we can target it and style appropriately. Mr. Sivers put his on the html element:

So for instance, the navigation got all messed up when it was text-aligned right. All we have to do is target it with CSS and make minor modifications:

And that’s it! Rinse and repeat for the affected areas. Believe it or not, this targeting seems to be supported by all the major browsers (unheard of, I know!) so try it out on your next multi-lingual site and see how awesome it is.