Frustration is part of many of our lives. We can't get what we want, or get it when we want it. We blame anything and everything but it remains. There's something else at work.

It seems that there's always something between me and a goal I've set. The road to my goal is often laid out as a one laned road and inevitably, some large and slow moving thing gets in my way. I fuss and fume and make a stink but nothing changes. That gigantic thing ahead of me just keeps chugging along at 1 mile per hour.

So it's at this point that I begin to question my plans and start plotting new roads to that goal. But if you've ever seen a road construction crew, you know that it takes forever for them to get started, and it's the same thing for me when I consider a new path to my goals.

I remember there's all kinds of ground work to be done before I can even think about riding on that new road, so there's more frustration.

Does this sound familiar?

Sitting behind that giant slow lummox, I get angry. And when I'm angry I don't care much about anything other that getting that behemoth out of my way. And sometimes I can try hard enough and work long enough that I succeed in moving the lumbering mechanical mountain in front of me.

And when it's out of my way, I finally realize just what it was. It was this: 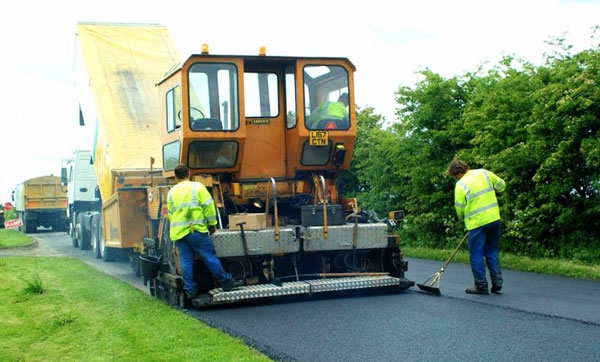 It was an asphalt laying machine, literally paving the way for me, making my ride smooth and easy.

So what's the problem then? Impatience.

The plans I laid were just fine, I simply forget that carrying them out takes longer than I want them to.

All we see is other people and companies achieving their goals. We rarely see the time and hard work invested to get them there. Sure there are those “over night” success stories, but the the skills needed to make that success took their sweet time to learn, develop and put to use.

Sometimes we do need to forge a new path, but mostly, we need to chill.

If you are there right now staring down the backend of a big delay, don't worry. Get somewhere worth going can take a while. Let time do it's work and you won't miss life along the way. Because if there's one thing I've found out about realizing a goal, it's this: The satisfaction fades. Enjoy the ride, there's a lot more of it.